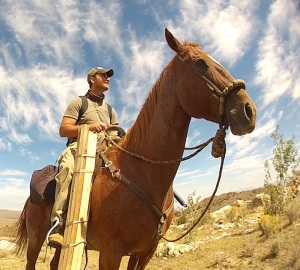 For the past month I’ve been on the adventure of a lifetime. My job was to ride horseback through the California desert to visually verify the corner stakes for mining claims. You might be saying, “I didn’t know Craig rode horses,” and you’d be right. Up until last month I’d never ridden a horse in my life. The family of cowboys I’d be working for assured me of some on-the-job riding lessons. They called it the “immersion” program. Now when I say cowboys, I don’t mean people that just ride horses and wear the hats. These folks were the real deal. They live on a cattle ranch and literally drive cattle old west style. 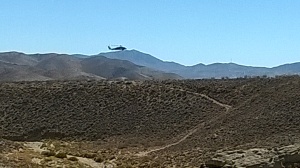 I was pumped. Of all the people to learn horse-riding from I lucked out with these guys, AND I was getting paid to do it! They told me we’d have to ride, hike, and climb through some rough terrain where we may encounter deadly animals, hidden meth labs, or illegal border-crossers from Mexico… Who could turn that down? 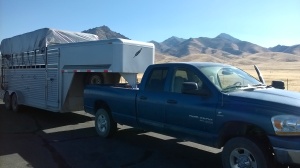 Our three person team towed a horse trailer deep into California to set up base camp. We pitched tents in an area centrally located among the grid of mining claims and setup a hot line as a pen for the horses near a small spring. 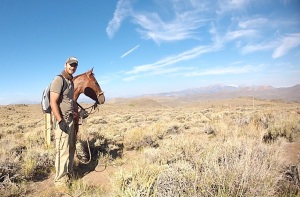 After a short orientation I was off on my own, riding a horse through the desert… or attempting to anyway. My horse was a stubborn old bastard and knew I was new to this whole horse-riding thing. I’d want to head straight, he’d want to head left. I’d want him to hold still, he’d turn in circles. It was loads of fun. At one point I was seriously considering what horse meat would taste like when I finally lost it and shot him. By day 2 I was over the whole horse thing. Moving on horseback was supposed to be faster, but instead it was slowing me down and making me look bad, so I just used him like a pack horse and navigated on foot. This seemed like the lesser of two evils but proved to be far more dangerous, and for the first time ever put me in my very own survival scenario. 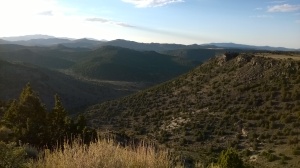 Hiking all day had taken its toll on my body. It was around 4pm and I had run out of water. My body was feeling sluggish and I started stumbling more frequently. At some point during this time my map fell out of the saddle bag… (All my army buddies just cringed) I know, I know. Amateur hour. I radioed for assistance from my co-workers to get a new map and was given a rendezvous point for my GPS. There was somewhat of a miscommunication on where this rendezvous point was which I will chalk up to being dehydrated, exhausted, and having my head lodged somewhere up my sphincter but to make a long story short, I ended up in the wrong area. This is also when my GPS ran out of battery life. (The battery was like a cell phone battery where it needed to be charged from an outlet or inverter neither of which I had out in the middle of nowhere). 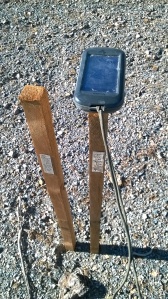 As a survival situation I felt very confident. I had several methods I could use to start a fire, and there was a creek further down the valley I was in so I knew I could start a fire and boil water if I got desperate. I also carried my rain poncho to use for making a quick shelter. If I was starving… there was always horse meat, and if I was freezing, I could be like Han Solo and make a Tauntaun sleeping bag like in Empire Strikes back…

The sun was setting and it was now down to me and my trusty military lensatic compass. I knew we’d been working to the northeast of camp, so I shot an azimuth for southwest and started walking, using the sun and the moon as my reference points. 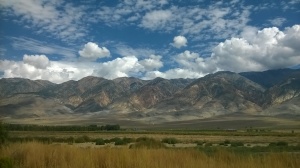 Now before people get too judgmental about terrain association, a spare map, extra batteries, etc. remember it is easy to be critical from the couch. You had to be there and see the terrain. This is mining country at the base of the Sierra Nevada Mountains where there are deep canyons and huge ridge lines. While I had made mental notes of where major features were located, my survey points had put me into a valley where I could no longer see any of those landmarks. The terrain also limited the amount of gear we could carry so I did the best I could. Eventually I crested a ridge and saw my boss Dave waiting for me. He didn’t look too pleased and we spent majority of the ride back to camp in silence. When we finally got back to camp I said, “I’m never gonna live this down am I?”

“Nope.” He replied, “Even when you become some famous survival instructor down the road we are still gonna remember this.”

The days were hot and the nights were freezing. You had to bundle up during the night to stay warm and cover up during the day to keep from getting fried by the sun. Prior to this I didn’t have much desert experience. I’d been in hot climates with the army before but not like this. I fashioned a turban out of an old t-shirt and found it kept me much cooler. I figured people in the Middle East have been living in the dessert for thousands of years and maybe I should take a page from their book. 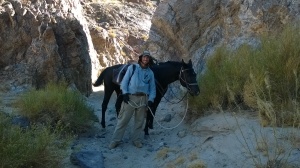 One late afternoon I needed to cross a barbed wire fence to access my survey point. I was tying up my horse when suddenly he screamed out and got a wild look in his eye. I spun around but didn’t see anything. I scanned the area for movement. In the distance was a dark forest and the perfect critter den. Something was spooking my horse. I just had that eerie feeling that we were being watched. I pulled my .45 from my backpack, racked one into the chamber and strapped it to my belt. Just because you can’t see it, doesn’t mean it isn’t there. We continued on and my horse continued to freak out. While I never did see anything I’m 90% sure I was getting stalked by some large predator. Luckily I didn’t have to find out.

Once we finished one set of claims we’d head to another. Both my surveying skills and my horse-riding skills improved with each site. Our next stop was the old Calico Ghost Town. This had been a gold mining town long ago which had now been converted to a tourist attraction conveniently located on the way to Las Vegas. Busloads of Asian tourists would drive past our camp during the day gawking at the American Cowboys and this Arab looking guy with a t-shirt turban… Here we were joined by another 3-man crew who would check claims on foot in areas where it didn’t make sense to bring the horses. 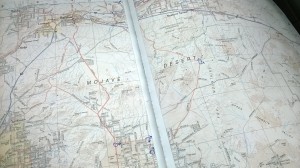 Our next gig landed us smack middle of the Mojave Dessert. I was so excited. I had always wanted to go to the Mojave and explore. After cresting a ridgeline I could see an abandoned mining tunnel near my next point. It looked like I was rolling up on Smog’s cavern. 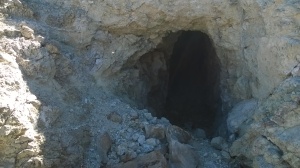 I encountered several other mining tunnels that trip. One had a small brick cabin built on the front. I tied my horse out front and went inside. There were bees everywhere. Considering the temperature I found this very interesting. Why would they choose here? I crept further along, trying not to disturb them and then I saw it. The tunnel contained a large pool of water about 4 feet wide, 10 feet long and 10 inches deep. Outside it was over 100 degrees but here I was in a cavern filled with water. 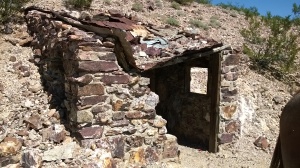 As I traveled outside I came across the shell of a large tortoise. It was bleached white from the sun. I tried to imagine ways I could use it in a survival situation or as a primitive tool. 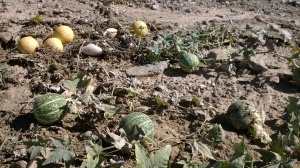 We continued along our route and came across a small area of what looked like melons. I broke one open to reveal it was full of moisture. It looked and smelled like the inside of a cucumber. I put one in my bag to check out further back at camp. I ended up waiting to experiment with my find until I got home. It smelled like a regular vegetable, so I put a small piece on my tongue. I spit it out immediately! It was awful and I instantly washed my mouth out with Listerine. This would not be a good water source. 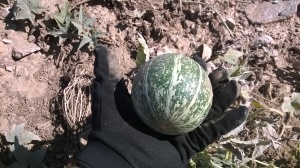 I have many more small tales to add but I’ll save them for another time. A special thanks to the Stoddart family for giving me this once in a lifetime opportunity and for being such amazing hosts. 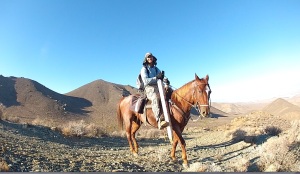 As for how this relates to sustainability… I think it is important to mix book learning with practical application. This job provided me a way to try out my survival skills in some of the toughest terrain that the U.S. has to offer. I was always looking for water sources, identifying plants, and being aware of my surroundings. I also got a glimpse into the history of mining operations and an inside look at how they do business. Overall it was a great learning experience and as always I am looking forward to the next adventure.