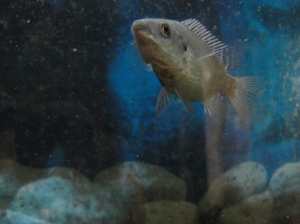 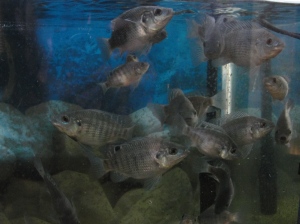 The tilapia vary greatly in size. Some have gotten quite big (around 3.5 inches) while others remain quite small (1.5 inches). I’ve increased their food portions and have started feeding them twice a day.

My duckweed experiment was ruined when the water evaporated from the tubs during a hot summer week and killed the plants. Since then I started a new duckweed crop in a fish tank inside of the house with plenty of water. I also put some in the aquaponics fish tank in the greenhouse while it goes unused during the winter. 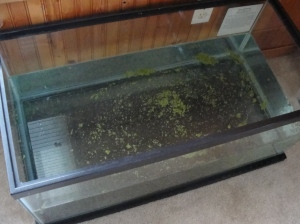 The tilapia seem to like the duckweed. I’ve tried feeding it to them in small amounts to limit any bacteria from the pond that could contaminate my fish tank.

As the fish increase in size I’ll be including cut of redworms and black soldier fly larvae into their diet.